A few days ago, I was heading back to my alma mater for a volunteering event. I know the area around my school well, and of course, I know the address to my university nearly just as well as I know my address to my apartment or to the family’s home. I know the area, I moved to the area for the very reason that this is the part of town that I understand the most. There was really only one difference: I was taking a different bus route.

San Antonio has a lovely bus system and because I live on a bus line, the city truly is my oyster. I can get just about anywhere and I can get there relatively quickly, I’m really quite lucky. But with being on a busy bus line meant options. There’s plenty of ways to get to the same place and with options often comes doubt.

I selected the route best for me, though one I had never personally travelled. I guessed, second guessed, wrote directions down, saved the map to my phone all to get to a place that my heart knew by memory. So I began as the sun just barely started to lift through the thick clouds of fog and mist to the familiar part of my journey. That was the easy part.

I then got to the unfamiliar part of my journey and even though I knew ‘where’ I was I didn’t know how to get there. I scrambled around looking for the proper bus stop. This side of the street, the other side? East-bound, towards the transit center? I really was in a moment in a small tailspin. I didn’t trust my gut enough to just calm down and figure out where I was and gather my thoughts. Finally, after fiddling around with the map on my phone and the compass (yes, I had to break out a compass for this one.) I did something that seemed all too logical… 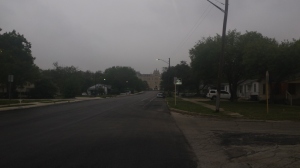 I realized that my destination was just in front of me and I would have saved a lot of time and a lot of energy if I had just looked up. And there in the distance was the shining, misty visage of my Alma Mater (It was in that moment that I finally started to understand why we call these places Alma Maters. It really did feel like I was coming home.)

I trudged on the nearly mile  to my alma mater, the bus I was supposed to be on zipped by and I continued on foot. It felt amazing, I just kept walking. Now, mind you walking in near freezing temperatures in the early parts of the morning wasn’t the smartest idea but it felt great. I had to learn to trust my gut and I began to wonder why I didn’t listen to my instincts sooner? I’ve always been told that I have a good head on my shoulders and that my instincts often lead me to positive things (many friends think I’m almost a little psychic when it comes to this.) so why didn’t I just listen when the goal was so clearly in front of me?

As a 90s kid, I realized that I was afraid of my instincts mostly because we saw it fail our parents. So many events struck our generation that just defied all logic and reason: even when you had it all together, the best plan, the best process, the steps all counted out things seemed to still go wrong. We saw instinct fail our parents, our country and our generation. Coupled with that, we gained access to fantastic technology that we never had before. We found security in maps, strength in formulas and unity in science. Because when all else failed, we had that. It was easier to trust a map than our eyes. It was easier to trust an algorithm because it can’t fail. It was easier to trust science rather than emotion. And even when technology wasn’t the answer, we found security in the atlas, the encyclopedia, in periodicals: they were infallible; our instincts weren’t.

I’m not saying we should throw out our phones and just start navigating by what’s in our hearts and the stars above I rather like having a map on my phone but we should be more open to listening to the what our hearts have to say. They aren’t often wrong, and if they are…we learn and grow from it. Just always have a back up plan, just in case.