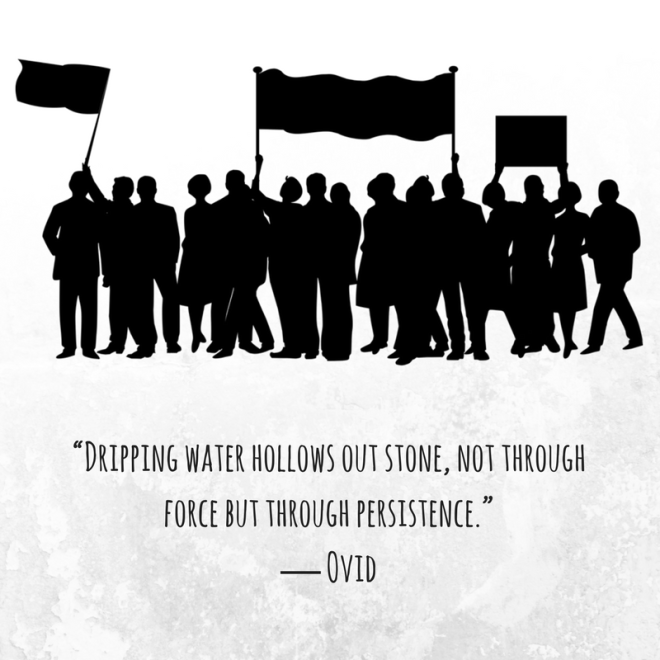 Has it only been a few months since Trump was sworn into office? It certainly feels like it’s been much longer. And the thought it this potentially being a years long affair into just how far down the America I came to know from childhood can go down, I think it’s important to mention how to be politically aware, active and how to still remain sane and true to yourself.

Let’s get one thing out of the way: these are of course my opinions and I’m really not wanting to start a flame war in the comments. If you disagree with me, that’s lovely, just do so respectfully.

My history with being politically “woke” is a fraught one. I struggled with being connected as a teenager and debate student. I struggled during the Bush era and the violently American propaganda age of the 2000s. I found hope during the Obama years and since the mid 2010s have additionally struggled with increased social tension, police violence, hate crimes and homophobia. And honestly, it all reminds me a lot of the Bush years. There’s a powerful person in power that I less than agree with but I don’t always feel in the position to do much about the situation. I was, am and probably will be for awhile totally overwhelmed by Trump. How anyone can look at him and agree with the venom that oozes from his mouth…well, that’s another blog post. It’s been difficult to empathize with the other side of the political aisle, as it was in the early 2000s. I found myself then a mostly emotional and verbally impotent teen all those years ago and now I’m a working adult that has to be kind to everyone despite at times boiling anger from the rhetoric from the GOP. And considering my mostly liberal leanings, this has been difficult. I’m a strong LGBT ally. I’m a Roman Catholic but a lover of science. I’m a person of color. I am biologically female. Almost all of the issues that have been brought across the aisle and to the table directly impact and affect my corpus and my existence. But with all the comparisons to Bush and the hyper-patriotism of the early to mid 2000s: how did young ingenue Amanda deal those years?

Many of you now know that I am a former (reformed, past…something) punk. And the particular type of punk and emo rock I listened to was very political. American Idiot is one of my favorite albums and hearing songs like American Idiot and Holiday gave so much form and shape to the mess of emotions and indignation that swirled in my mind during the uber-patriotism and growing racial and social tensions the 2000s brought with them.

In my youth I started wearing black hoodies in part because of the song Mosh. It was my rebellion. It was a powerful symbol to think that at least a few people also clad in the black hoodie of resistance knew the message they were sending. I only recently retired the black hoodie after the death of Trayvon Martin and having to step up my personal style as a grew from being a petulant teen to a working young person. I knew the hoodie didn’t actually do anything but it felt like a powerful enough statement.

The Obama years while far from perfect were better. And in the moments where racial tension did bubble up I was mostly able to remain active politically with friends, family and have healthy discourse.

I’m not quite sure what happened but 2012 seemed to be a difficult time for everyone. Usually civil conversations began to run deep with overly religious and xenophobic undertones and this was well before the hot garbage fire that was 2016.  And with the current state of the world, I find myself like so many confused, angry and unsure of how to react and exist when everything everything is political.

Amazingly, some of the music of my teen years has been instrumental in helping cope with some of the issues feeling unrepresented by your representatives. Comic books have also been a fantastic way to channel some of that energy. The Civil War storylines in Marvel comics have heavy allusions to real government issues and concerns and encourage you to pick a side. Movies have also been helpful even when they’re difficult to watch. Watchmen  was not an enjoyable movie but some of the moral, ethical and political statements made by the movie especially are very timely. V for Vendetta is very similar down to the current state of the world down to the shooting of an innocent child that begins a revolution and  a 1984-style authoritarian regime that likes to censor speech and rules by fear and false information.

Satire has been remarkably helpful in dealing with this current administration as it was during the Bush years. Last Week Tonight has done a great job of holding Trump accountable and while Trevor Noah is no Jon Stewart, The Daily Show is still a shining beacon of satirical light in an otherwise dim world.

But music alone does not soothe the savage president. Being active doesn’t always being at every protest. It means calling your local representatives. It means speaking up for those that may not have a voice. It means fact-checking and being aware of the issues. It means maybe having to face the other side of a political topic and it means taking care of yourself to battle another day for the causes you believe in. If you see a problem, say something. But be kind to yourself. If you don’t feel comfortable going to a protest, rally or event: don’t go. There are other ways to support causes and considering the current trend of violence against even peaceful protests, I am entirely empathetic to the wish to avoid big rallies for fear of violence. But being aware if vitally important. Even now, logic and facts are being used against people so it is now more important than ever to be aware, active and persistent. But it’s also good to know when to back down. Some people are not going to change and all you can do is be yourself, be as active as you wish and stay sane to continue the conversation for another day.

Stay kind, world. We have a little while before this dumpster fire can go out.