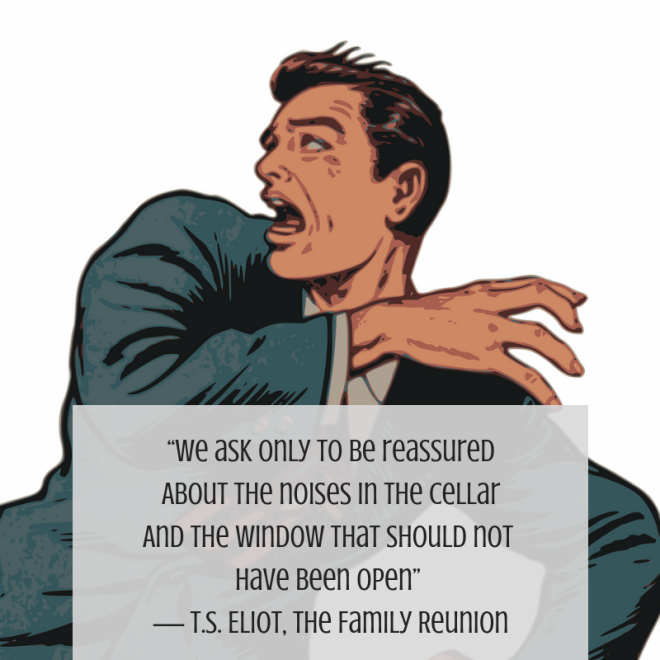 I have the pleasure of working in a historic office building downtown. The building itself is over 100 years old and the city I call home is now proudly 300 years old. I’m within walking distance from the famed Alamo: hell, the original battle of the Alamo spilled over into where I sit and work nearly every day of the week.

And in the spirit of the season and as is tradition on this humble blog: I’m here to tell a ghost story.

Pull up a chair. Sit down. Dim the lights. Relax. Hopefully, this one won’t be too terrifying.

I work on the second floor of a building with six floors. We have a large atrium and an elevator that barely works but does its best.

Our office is small, both in size and physical capacity and occupancy. There’s only a few of us here. That means gossip travels quickly. So when the doors creak, phones ring without them being turned on and other strange occurrences; we naturally discuss such a thing. We’ve all had experiences. I heard my name clearly in the back of my ear when no one had called it. My boss has encountered shadow-like shapes in the men’s room. Our accountant has heard doors rattle and all the rest of us minions have experienced at least one paranormal thing in the office and it’s amazing how quickly one can just accept a place being haunted. Normally, a ghost or apparition like this would add character to a place but these occurrences seem to only be enough to temporarily frighten and then promptly be forgotten. It’s likely the most effective coping mechanism we have against dealing with such a threat: the prospect of ghosts is such a primal and existential threat that the mind likely comes up with many excuses to such things just for the sake of maintaining any base level of sanity.

But we’re not here to discuss the trapping of a mundane haunting, dear reader. Certainly, you expect more from your host.

It was a mostly quiet afternoon. I kept my headphones in because I require noise to work. There was very little conversation. We all had something to do.

And that’s when we heard it. It started out sharp. It was a sound I heard in the back of my ears, through my headphones and whatever podcast or music I was listening to as a means to pass the time. But it was distinct. It was a scream. It was, specifically, a man screaming.

All of my coworkers looked at me and we all looked at each other. We collectively rushed out of the office and leaned against the railing to see what happened. It sounded like someone had jumped from the top of the building but as we gazed down into the atrium: there was no one there. Our building neighbors had also rushed out to see what the commotion was all about. We had all heard The Scream.

Eventually the disbelief dissipated and we returned to work. Whispers started in the office that erupted into chatter. It was revealed that this was far from the first instance of The Scream heard in the building. My boss had heard it before and other tenants have discussed the phenomena in great detail. Each person tells the story in a similar way: it sounds very clearly like a man screaming falling from a great height. You can clearly hear the ebb and flow of terminal velocity in The Scream but you never hear the impact of falling and meeting the cold hard tile of the atrium.

We’ve considered all the options of what the ghost may be. Maybe it was one of the not-so brave heroes of the Alamo who wandered too far from the battlefield. Maybe he was a working crafting this historic building. Maybe he was a man who was at the end of his rope while working and saw only comfort at the end of the mortar and ceramic of the grand atrium.

I’ve heard The Scream a few times now. Honestly, you never really get used to it. You never get used to hearing clearly in your inner ear the sound of a man falling to his death over and over again in your workplace.

Now most days are a waiting game to see if we will hear The Scream again. We’ve flirted with the idea of buying items to see if the ghosts in the building will communicate with us. I’m barred from bringing in my tarot cards for fear we may receive or attract something not so pleasant. We joke that our breaking point will be collectively when we all see a full-body specter but I’m sure that isn’t true: running from a ghost doesn’t remove the experience. That haunting stays with you.